Recipe of the Week: Campfire Sour

Welcome to another installment of our Recipe of the Week series! This week Alex tried out a Campfire Sour recipe from W&P Design.

Just a quick disclaimer: Maple Valley does not condone underage or irresponsible drinking. If you are going to try this one out, please be sure you are over the age of 21 and you have a designated driver available. If this describes you, check out the original recipe here.

Let us know how it went in the comments below. Be sure to include any changes you made as well as any suggestions you have for future recipes. 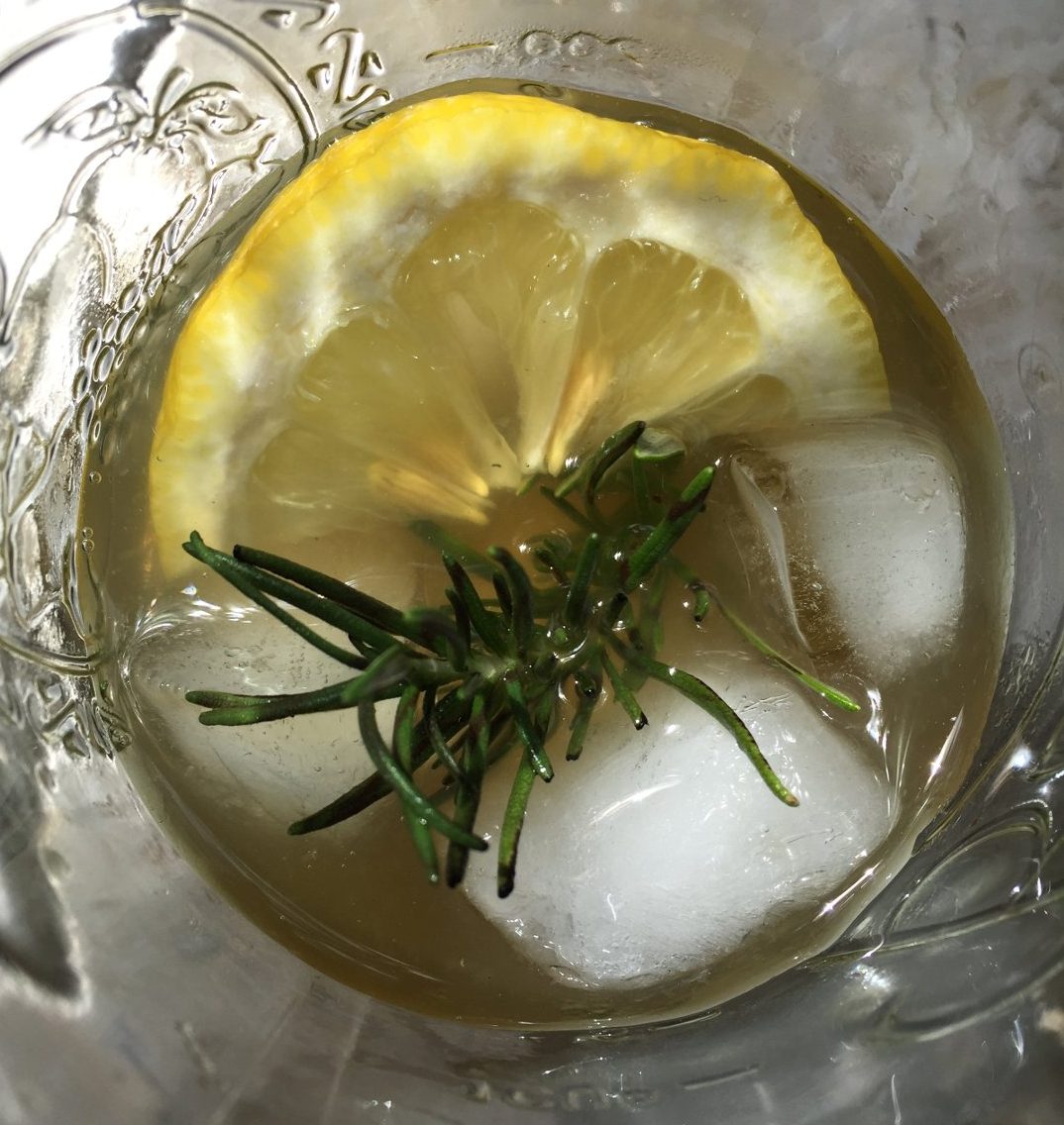 Hello! Alex here with another maple recipe for you.

Last time I tried making maple bacon dip, and it was a win! Check it out here.

It’s almost the end of July and I wanted to try a recipe that would capture the essence of summer before it was gone. When I saw W&P Design’s Campfire Sour recipe, it seemed like just the thing. The recipe has this cute story about friendship, and campfires, and bourbon. I was sold. You should check it out.

I was excited to try this one. However, if I wanted the full experience, I would need a sunny, hot, summer day. Finally the day came and it couldn’t have been more perfect. Read on to see how it went! 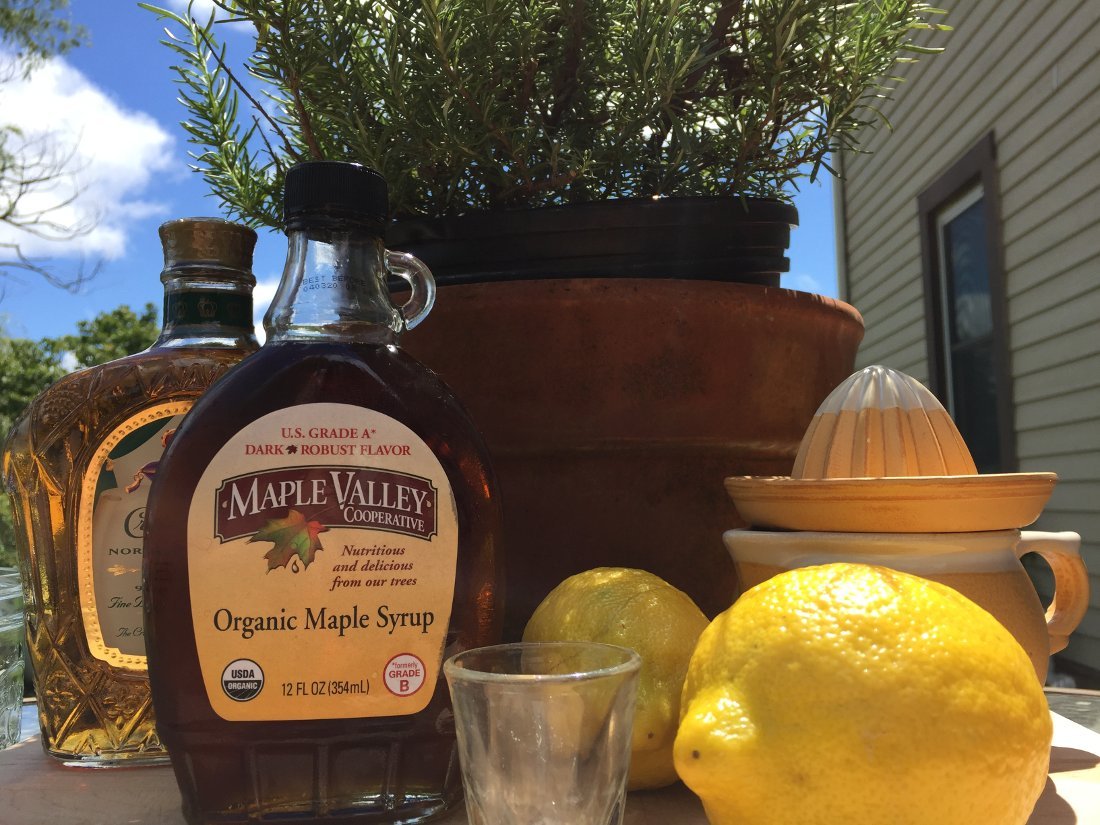 You would think a drink recipe wouldn’t call for much, but I was surprised about how many things I had to gather for this one. Sure, there are only 4 actual ingredients, but I also needed a knife, a cutting board, a scissors, a citrus juicer, a strainer, a lighter, 3 jars, a lid, and a shot glass. I recognize that things would have probably been easier for me if I had actually purchased the nifty Mason Shaker that W & P Design has for sale on their website. However, I was not well prepared, so I had to improvise. I think I got by okay with the tools I had available. If you try this one at home, be sure you are prepared. 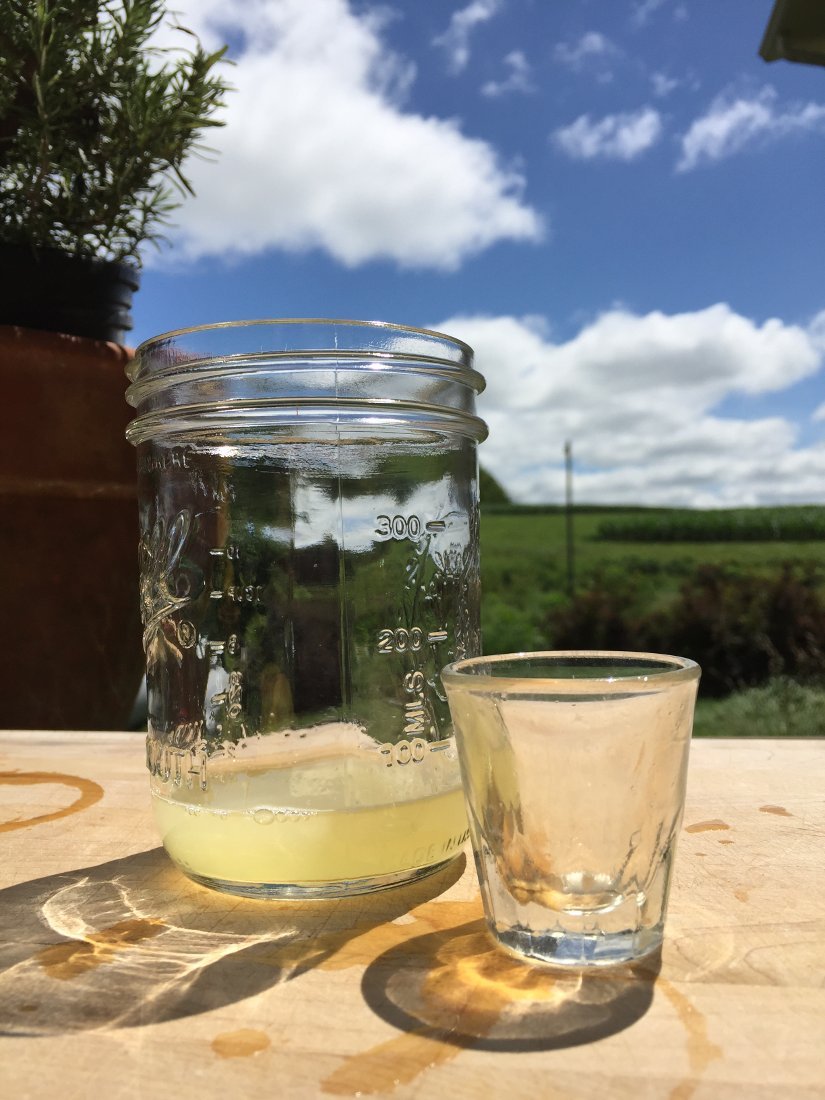 The first ingredient required for this one was 1 & 1/2 shots of fresh lemon juice. I wasn’t sure how many lemons I would need for this amount so I bought two. It turned out that one was plenty for this recipe. If you want to garnish your drinks with some lemon at the end, I recommend cutting off a slice of lemon now and setting it aside for later, then squeezing the rest of the lemon for juice. This way you can avoid cutting into the second one like I ended up doing. Bad planning once again.

Once it was squeezed, I added it to my mixing jar. 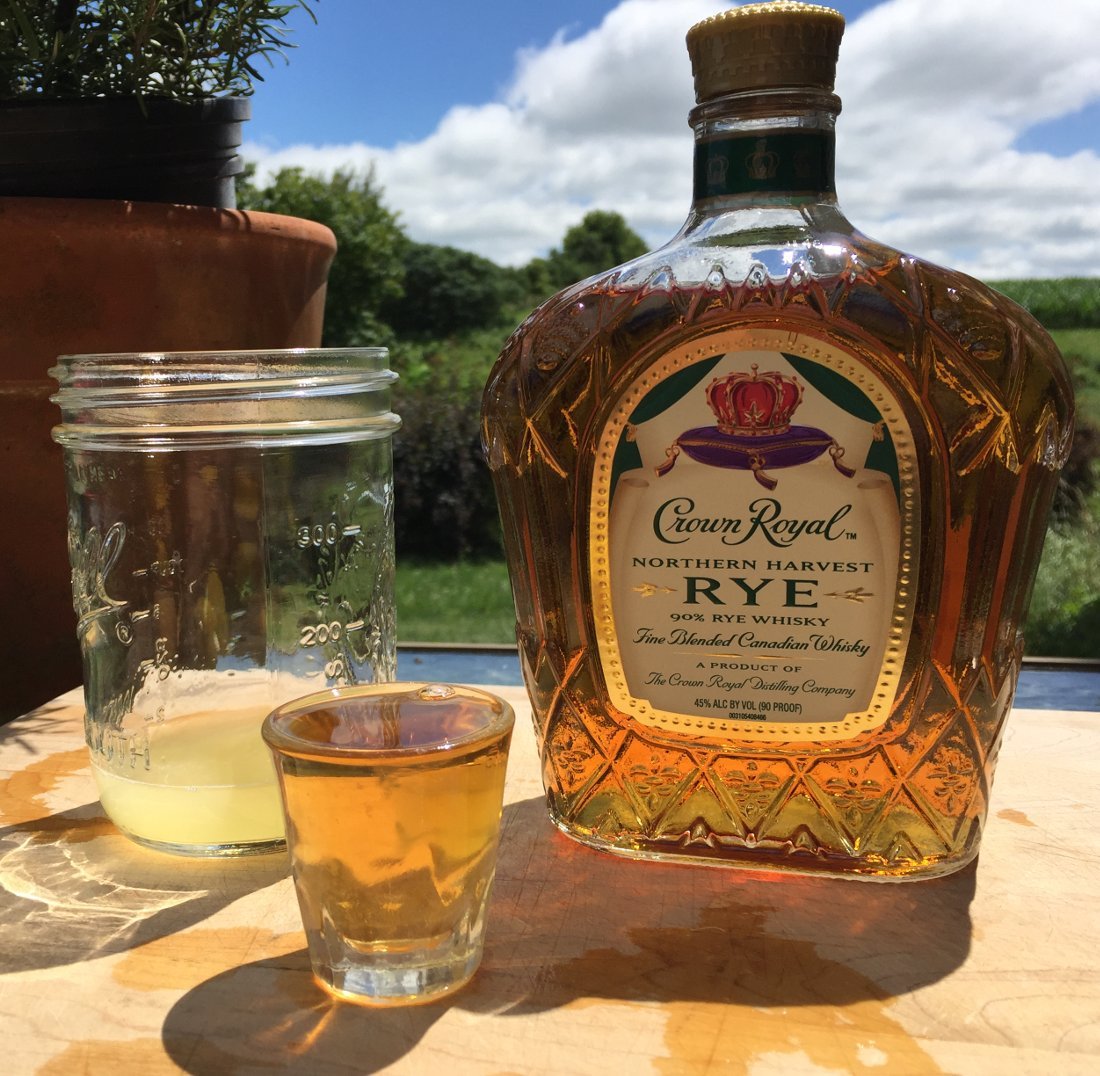 The recipe calls for Rye Whiskey. When I went to my local store to purchase said whiskey, I was disappointed to find that they only carried Crown Royal. Not usually by brand of choice. I will say, however, that I think it is important to find a good quality whiskey for this recipe because the flavor is not highly masked by the other ingredients. Make sure you select a brand you enjoy. The Crown Royal I used ended up tasting fine in this recipe, so I guess I shouldn’t complain too much.

As required, I added 3 shots of whiskey to my mix.

Yum, yum! This is the good stuff. This recipe called for 3/4 shot of maple syrup. If I make this again, I will probably add more. The maple flavor was pretty much lost to the stronger whiskey flavor, hence my previous warning. I also recommend using the Dark and Robust syrup if you want your best chance at having a maple flavor in there.

If you search the web for fire resistant plants, the results are pretty divided on whether or not rosemary is flame resistant or highly flammable. According to my experience with this recipe, I would have to say I’m on the resistant team. It took many, many tries for me to get the rosemary to burn enough to create smoke. I first tried burning the tips of the needles and had no luck. Then I found an especially woody piece and tried to light the stem. That didn’t work very well either. When I finally got one to smoke, I would put it in the mix and it would go out before I could put the lid on. Basically, this part did not go well for me. 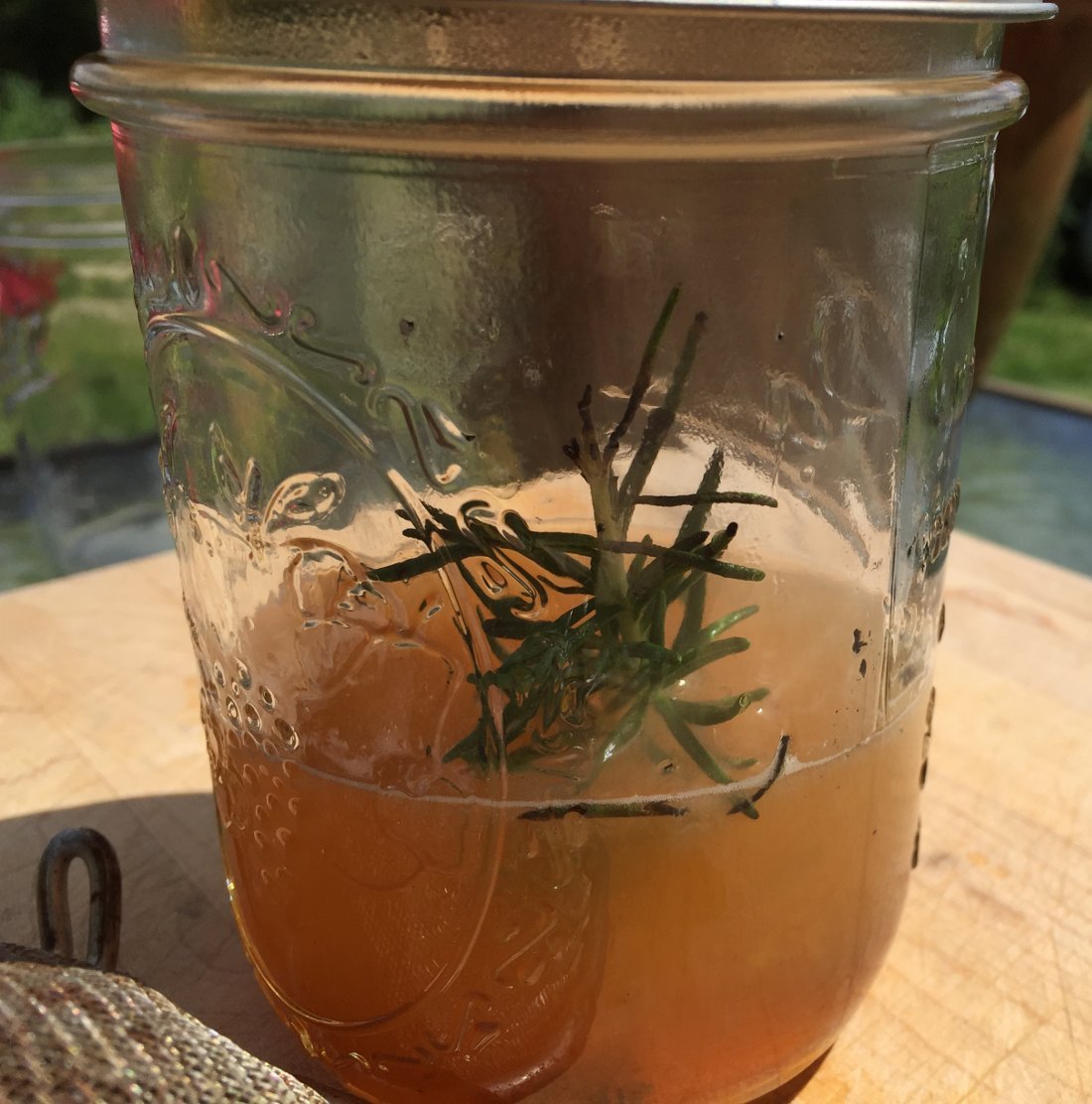 After multiple failed attempts, I got a small amount of smoke to gather in the jar. I left it sit for a couple of minutes instead of the suggested 30 seconds, just to make sure the smoky taste would blend with the liquid. 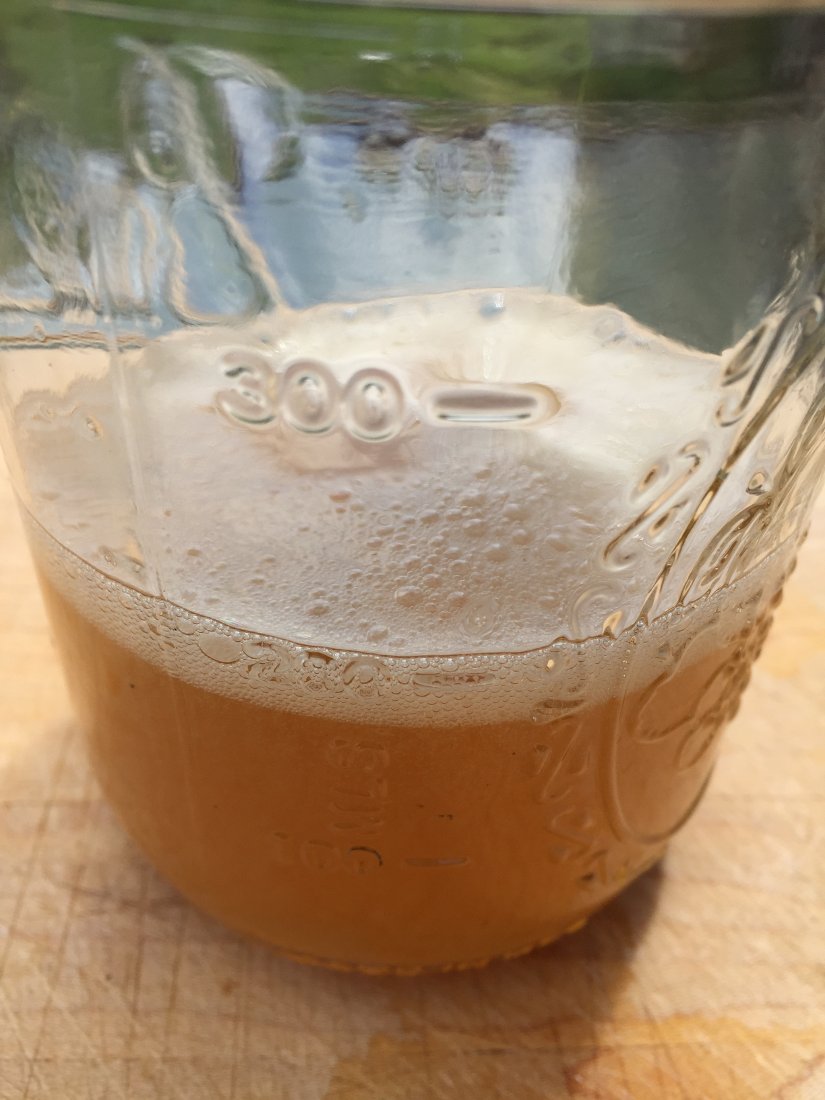 All Shook Up (uh-huh)

When I removed the lid, all of the smoke escaped the jar. I reached in and removed the rosemary and noticed little bits of ash floating in the mix. I decided it would just add flavor and proceeded to add a few pieces of ice. Then, I put the lid back on and gave everything a good shake. 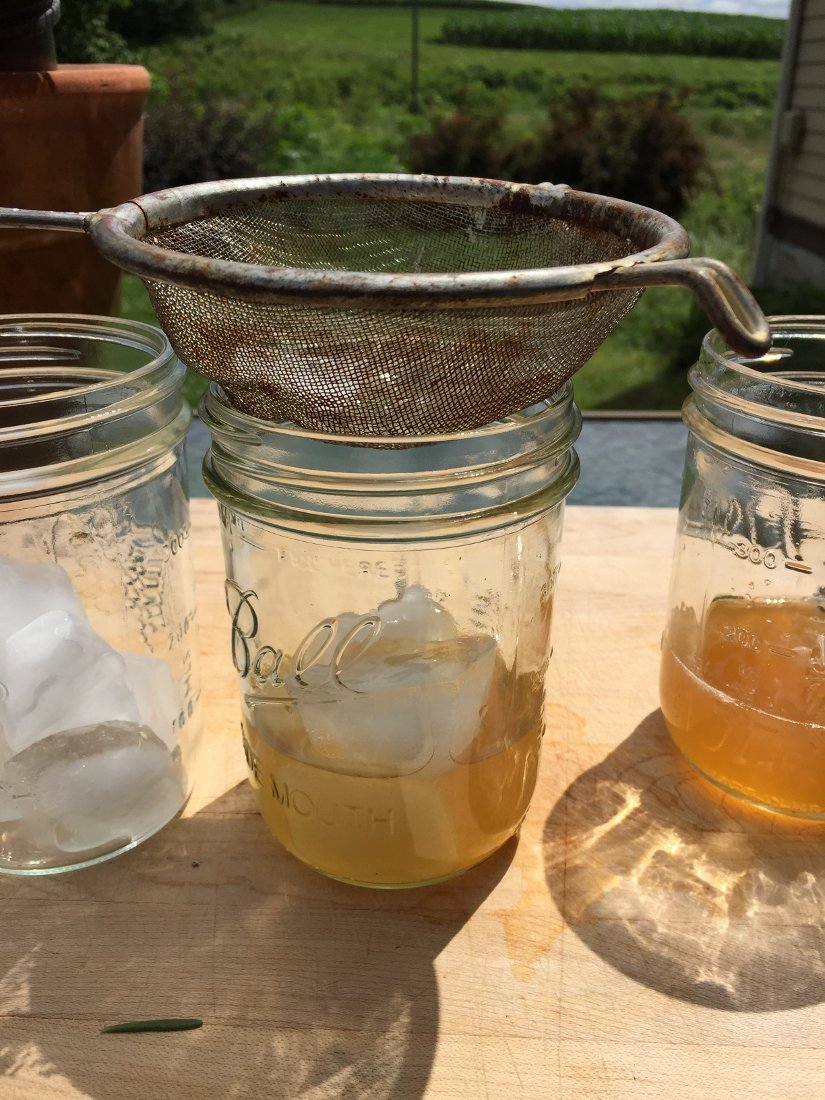 Pour Me a Drink

Since I didn’t have the fancy shaker, I poured my drink through a metal strainer. No shame. I had about six ice cubes in each glass. I garnished them with some lemon and a sprig of rosemary. They sure looked pretty!

The flavor was good, but not what I had hoped. It was a little bit sour and very refreshing. The flavor of the whiskey overpowered everything else. There was no flavor of rosemary or maple syrup detectable in the drink.

I’m not sure if it would make a difference, but next time I would skip adding ice before shaking and just shake everything up with the smoke and rosemary still in the jar. I would also plan ahead by drying out my rosemary first. I might try crushing fresh rosemary in to the mix for more flavor.

So, although it was a tasty drink, it was kind of a fail. It didn’t have a campfire flavor, it was a lot of work (mostly because of the trouble burning the rosemary), and I couldn’t taste the maple syrup at all. If I make this again, I will probably use lemon juice from a bottle and add more maple syrup. Cheers!

Did you try this one at home? What did you think? Let us know in the comments below!