Today Wisconsin ranks 4th in the nation for maple syrup production. But long before settlers arrived with the first European honey bee or began importing sugar cane, Native Americans were producing maple syrup. The lore in Wisconsin suggests that Chief Manabush of the Menominee tribe was concerned that his people would be too lazy if they only collected maple sap from the trees, so he had them create syrup – an arduous process. 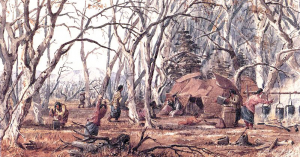 The production of maple syrup has many challenges; unpredictable wintry weather, an exacting multi-step process, and patience needed during the evaporation process. For sap to flow, maple farmers need sunny days with above freezing temperatures and cold nights falling below 30 degrees. As it takes 40 gallons of sap to produce 1 gallon of maple syrup, and in turn, 1 gallon of syrup to produce 8 lbs of maple sugar, the sugaring season required substantial cooperation to make what Native Americans considered a very special energy food for their diet.

Modern science now shows that organically produced maple syrup is one of the most sustainable superfoods available. Organic certification ensures that no chemicals are used in the woods, during the evaporation process or in the cleaning of commercial bottling facilities. It also requires organic producers to practice responsible forest management, encourage diversity of tree species, protection of wildlife and healthy insect habitats. At Maple Valley Cooperative, we go one step further by asking our farmers to sign a purity pledge to only use organic vegetable oil as a defoaming agent instead of organic butter, allowing us to be Kosher Certified and call our products Vegetarian and Vegan compliant.

Produced without annual tilling or soil erosion, and harvested from Sugar Maple trees that sequester carbon dioxide, maple syrup not only contains vital minerals and 54 antioxidants, but its effect on our body’s health is neutral to alkaline producing, unlike most sweeteners which create acidity. With a low glycemic index, maple syrup doesn’t raise blood sugar to the degree that processed white sugar does, making it an ideal addition to restorative sports drinks. Organic maple syrup is also the main ingredient for The Master Cleanse Lemonade Diet, one of the most widely used and popular detox plans available.

In its earliest days, indigenous Americans used maple syrup to flavor soups or meat. In the 1600s it was exchanged for wool and goods from fur traders, who quickly noticed its value. By the 1800s European settlers in Wisconsin had learned to craft this indigenous delicacy from Menominee, Ojibwe and other tribes, creating a blossoming maple industry.

When easier-to-obtain beet sugar hit the market in the 1900s, maple syrup production dropped. The market narrowed, filled with cheap imitations, and real maple syrup became a rare treat rather than a kitchen staple. Today, the desire for a healthy, natural diet captures growing attention and organic maple syrup is poised to regain its deserved mainstream popularity as a nutrient-dense, sophisticated sweetener and a deep North American tradition.[/vc_column_text][/vc_column][/vc_row]